As you know, I don’t live in Estonia at the moment and for now, I have been living in Spain for 8 years. I try to visit Estonia every year or every other year because wherever I am, Estonia will still be my home!

I thought that maybe you would like to learn some things about Estonia, so I gathered some interesting facts for you:

1. There are 195 countries in the world. Estonia is the 131st-smallest country in the world by land mass and 152nd-smallest by the population. If it helps you, in the area, Estonia is about twice the size of New Jersey.

2. Estonian flag is a tricolor featuring blue, black and white. Blue represents – freedom, sky, sea and truth; black symbolizes – dark past and suffering, the soil of the country; and white, the promise and pursuit of a brighter future.

A little bit of #Estonia

3. We celebrate our independence twice a year. On the 24th of February when Estonia was pronounced independent and on the 20th of August when that independence was regained.

5. In 2016 Estonia got the first female president in our history – Kersti Kaljulaid.  She gave an amazing speech for all the Estonians throughout the world (subtitles in English).

6. For every 100 females in Estonia, there are 84 men – only the Northern Mariana Islands, a US territory in the Pacific, with a population of around 50,000, has a smaller percentage of males.

7. Estonia is one of the least religious countries in the world.

8. We have one of the strongest education systems among all OECD countries, with above-average results in PISA and almost universal access to pre-primary education.

10. We rank among the highest in the world for English language proficiency.

11. More than 50% of Estonia is covered by forest, and they’re actually expanding!

12. So it’s not a surprise that Estonia is also among the cleanest places on the planet earth to breathe.

13. Estonia has the highest number of meteorite craters per square kilometer in the world.

14. Internet access is regarded as a human right in Estonia. 4G services cover over 95 percent of the territory – which means that you can even get 4G in the forest.

15. Estonia is the first country in the world to have used the internet for political voting.

17. Did you know that Estonia is the birthplace of Skype, Kazaa, Hotmail, TransferWise, and GrabCAD?

18. Arvo Pärt, the most influential minimalist composer of the 20th and 21st centuries and also the most performed living composer in the world is Estonian.

19. Estonia is the birthplace of the first Christmas tree or maybe it’s our neighbor Latvia, we still argue about it.

20. Let’s Do It! World is a civic-led mass movement that began in Estonia in 2008 when 50,000 people united together to clean up the entire country in just five hours. On September 15, 2018, World Cleanup Day, people in 150 countries will stand up against the global trash problem and clean up waste, making it the biggest positive civic action the world has seen. Join!

22. Estonia is the top nation per capita for the number of international fashion models. Carmen Kass, Tiiu Kuik, Karmen Pedaru, Anett Griffel and Kelli Lumi are just a few supermodels from Estonia.

23. You can’t buy any alcoholic beverages after 10 pm.

24. You have to wear safety reflectors during the nighttime or when the visibility is inadequate. Yes, it’s a law! Otherwise, you could be fined up to 400€ ($422). 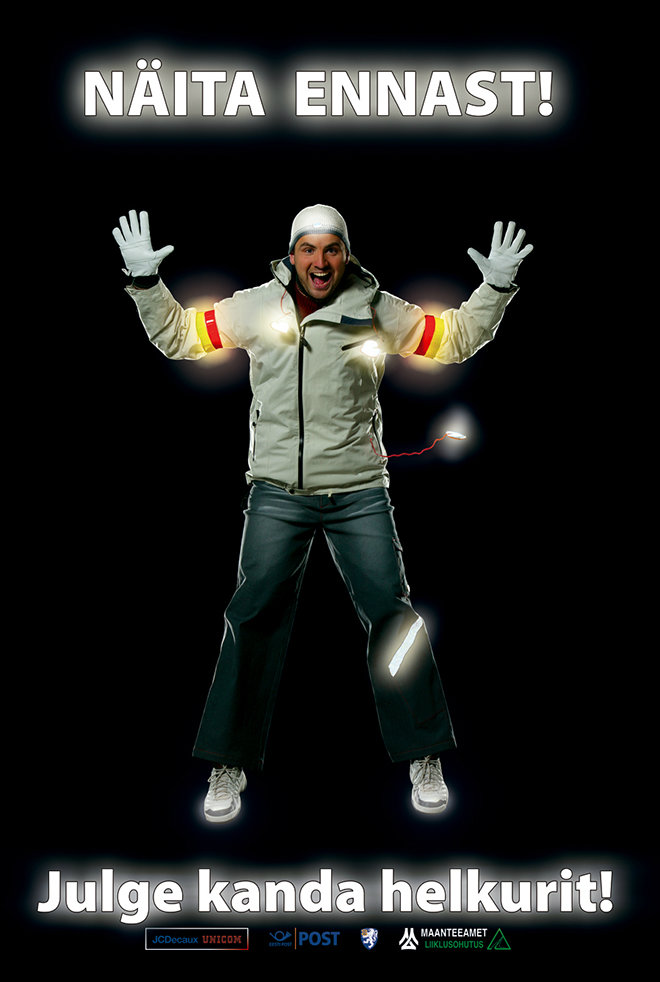 Road safety campaign: “Show yourself! Be bold enough to wear a reflector!” (source)

25. Estonia doesn’t accept dual citizenship, but Estonia is the first country in the world to offer the concept of e-Residency.

What’s the most surprising fact you learned about Estonia from this post?