A Few Words in Honor of Eyal, Gilad and Naftali

I don’t usually write about politics on the blog… actually, I don’t think I ever have. I tend to avoid it because people have such strong feelings about the Israeli/Palestinian conflict and it seems senseless to discuss it and open up the blog to debate. This is meant to be a happy place and I don’t like to bring sadness and conflict to it.

However, today the entire country of Israel has gone into mourning as three innocent Jewish teenagers have been kidnapped, killed, and their bodies left to rot in a ditch by Palestinian terrorists. They were planning to make an exchange: three Jewish children’s corpses in exchange for hundreds of Muslim prisoners – all of whom are in prison for terrorism, theft, attempted murder, etc. (Unlike these three kids who had done nothing wrong). 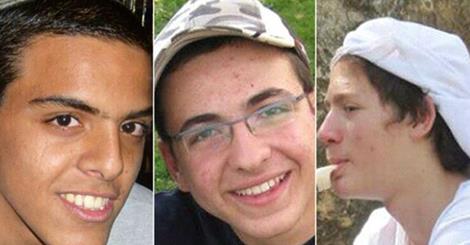 Say what you want about the Israeli-Palestinian conflict, but I, as a Jew, Israeli and former IDF soldier, have spent the last few years involved in an Israeli organization that provides free heart surgeries to Palestinian children. On the other hand, Palestinian children are literally celebrating the kidnapping and murder of these 3 Israeli innocents as we speak.  Something here is very twisted.

My Facebook feed is covered in the pictures of the murdered teens right now. Just a horrible shame and I doubt it will be left as it is. I don’t know what’s coming, but it won’t be good.