Pamplona and The San Fermin Festival

In July, a lot of festivals and concerts are held in Spain. There is something for everyone. But the most famous and important festival of the month of July is held in Pamplona – The San Fermin Festival.

This post is a brief review of different events going on during the festival. If you need more information, don’t hesitate to visit San Fermin Festival web page.

Pamplona is the capital city of Navarre (one of the 17 autonomous communities of Spain). It’s an industrial city with a population of around 200,000 inhabitants. The city is famous worldwide for the San Fermin festival.

We visited Pamplona in October 2011, while on our vacation in North of Spain. It’s sad to admit that the only things I remember from the visit are delicious food and the bulls statue. We also took the Bull Run route recommended by the Tourist Information Office – it was the only thing they recommended us to see.

Here are the only 4 photos we took there: 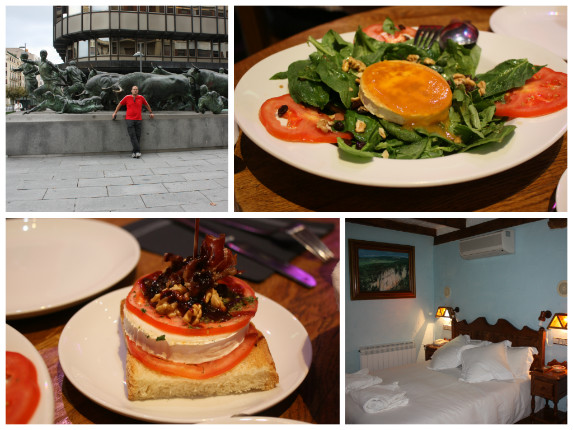 What to see in Pamplona

Of course, there are a lot of museums, churches, bridges, squares and other interesting sights to see besides the Bull Route.

It’s the most important festival in Pamplona. Thanks to Ernest Hemingway’s novel “The Sun Also Rises” (“Fiesta”), San Fermin Festival became famous all over the world. It’s held annually between July 6th and 14th in honor of San Fermin. Nowadays the religious part of the festival has a secondary role as partying and having fun has taken over the primary role. Over 1,000,000 people come to visit this festival. People use to dress in white and tie a red scarf around their necks.

During the nine days of the festival, there are different events held every day.

While there are a lot of traditional and folkloric events going on during San Fermin Festival, the most famous event is the bull run. It’s celebrated every day at 8 am during the fiestas. The route itself is 875 m long and leads to Pamplona’s Bullring through the old town. The run lasts about 3-4 min and ends when the bulls have entered the arena.

If you are not one of the thrill-seekers who wants to outrun the bulls, there are other ways to enjoy the race.

Sadly, the bull run is not just fun and thrill.  Since 1942, bulls have killed 15 persons.

Have you heard about the festival?